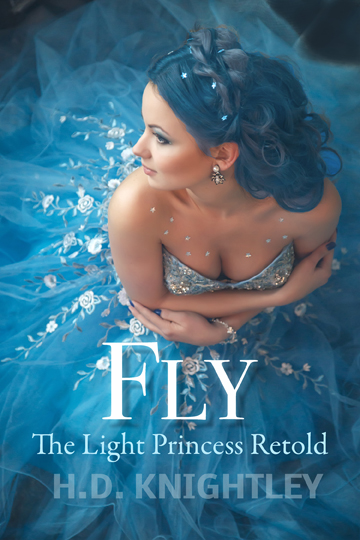 From the back cover:

Amelia is not like an ordinary fairytale princess. She’s airborne, literally. She’s prone to loop-de-loos and throwing lavish punk rock parties. She is always aloft and never ever comes down. Unless she swims.

And Hank is  not a prince at all. He’s worried about the increasing water shortages. Big worries – hunger, thirst, and the fate of his village. He carries them deep, but what can he do? He’s just a guitar-playing, surfer boy from the village, after all.

Hank asks the Princess to intervene with the King and his big, looming dam, but she doesn’t seem to care. The Princess never worries, and barely understands.

Until one night, Amelia asks, “Guitar Boy, will you play me a song?” and causes Hank’s heart to play the beat before he can even answer, “Yes, Princess, I wrote one for you.”

An excerpt from Fly, by H.D. Knightley:

The moon was out when they reached the edge of the water, revealing that it was lower than it had been just days before. Was it a mirage, or the tides, or was the water really receding, day by day? They stood for a few minutes looking at the muddy place where the edge of water should have been, but wasn’t anymore.

She was quiet, until she said, “I want to swim.”

Hank took off his jeans and his leather vest and laid them beside his guitar, and looked out over the small middle of the leftover lake.

He felt a jolt, as the brush of electricity that was Amelia’s faint touch, hit his arm. “Hank?” She had a way of saying his name that was more an exhale than actual syllables, and made him want to close his eyes and breathe it into his lungs. He wondered if the exhaled breath with his name on it might be edifying, especially when exhaled from the lungs of a flying girl.

He placed his hand on her hands to hold her tight and began squerching, and squelching towards what was left of the lake. “This is the second surface tonight that I’ve been incapable of walking across gracefully,” he said. “It’s humbling for someone who regularly walks on water.”

When they reached the edge, they were almost to the middle, and once they were in deep enough to be in, they were almost out again. He bent his knees to get his shoulders in and pulled Amelia down with a quick movement. It was like pulling fabric into water—there is a minute where it’s dry, the two substances aren’t connected, and then suddenly the fabric wets, almost all at once, and then folds over weighty, and drops in deeper. Amelia was like that.

They were in a small pond of water and the moon reflected all around. They swam in shimmers. Amelia stood across from Hank and made small flutters with her hands and arms, but didn’t stop looking at him. “Hank, where is the water going?”

“It’s going into tanks and behind dams.”

She made a quick kick and rushed forward, so that she was within inches of him. “Hank?”

She, in one movement, wrapped her arms around his neck and pulled him toward a waiting kiss. Hank was so shocked that he almost pulled back and away, but his hands reached out involuntarily, and pulled her face toward his, so that they met halfway and kissed and kissed and kissed. Amelia was no longer airborne, she was earthbound. Hank had lost his footing and was flung to heaven. Their midpoint was the last place they’d ever want to leave.

“Did you hear me say that I was going to be married?”

Hank pulled his head back and looked into Amelia’s face. “Oh. When?”

“Soon,” she said, and kissed him again, but this time it felt like a kiss goodbye.

“That’s not fair,” he said, “to kiss me hello and goodbye in almost precisely the same moment.”

She slowly pulled her arms away from around his neck. She went back to making treading movements with her hands and humming quietly to herself. Hank scrutinized her face.

“Princess? What are you going to do?”