I was reading through a stupid proposal from the department of housing and development when I heard a soft knock on my office door.

My eyes checked the time, oh no, I was very late.

“Did I miss dinner?” I clicked save on the proposal and shoved the screen away.

William pulled off his overcoat, dropped into a chair across from my desk, placed the bags on the ground and rustled through one. “You didn’t miss it, I brought it. I know you wanted to make it to Terran’s in time—”

I started to protest and he held up his hands to stop what I was going to say: That I meant to, I wanted to, I still hoped to. But he had heard that all before, many times. So I bit my tongue as he finished, “But you didn’t. No one holds it against you. They all say hello. And Terran says he misses you.”

He placed a bundle in front of me. I untied the string and pulled back the cloth and revealed a plate, with roasted chicken, a spinach salad with cranberries and goat cheese, and some spaghetti squash. It looked delicious and still warm.

William handed me a fork.

“You saved me from stuffing dinner bars in my mouth as I raced across New City crying because I missed dinner.” I took a bite of salad.

I nodded, chewing chicken that was seasoned with lemon pepper, one of my favorites. “Who was there?”

“Terran, Sunny, Frederick, me. Cameron and Katie stopped by just in time for dessert.”

I was twirling my fork in the spaghetti squash when he said dessert, and I asked, “Something sweet?”

“Absolutely.” He opened the second bag and brought out a wrapped loaf of some kind. I pulled the paper off to find pound cake. “My favorite! Who made it?”

“Sunny.” He reached into his jacket’s inside pocket and handed me a small jar of honey. I unscrewed the lid and tipped the jar over a slice. “You thought of everything, but also, what’s in the last bag?”

He said, “We’ll get to that after your hands aren’t sticky.”

I smiled, “My lips are sticky too.”

“And I didn’t bring a napkin.” He leaned across the desk and kissed me sweetly on my lips. Pausing there, inches from my face, he said, “I missed you today. The only thing that got me through was knowing that your work is important, also that it won’t be forever.”

“True, two years but it feels like forever when I’m dealing with ridiculous demands.” William dropped back to his seat, quietly, listening, so I continued. “They want me to okay new construction on the southern side of the city, William. It’s so beautiful, dark, and forested there, and I can’t let them. I told them to focus instead on rebuilding a portion of the gold quarter in Old Town. I even used that new term you coined, new-vitalizing—”

“They didn’t fall for that?”

“Their latest proposal wasn’t even close. And here I am arguing over building projects when the big thing I want to accomplish is turning off the damned Sky Projector, and I can’t do it because there’s a whole bunch of jobs tied to it, a lot of people relying on it, and strangely people like it. I took over the government, but I can’t do any big things, just small compromises with imbeciles.” I smiled. “Don’t tell them I said that.”

William gave me a half smile, “I don’t talk to them on principle.” He looked at me intently, “You know what I’m going to say, right?”

I said, “That it’s only for a couple of years, just a matter of months if you think about it, also the path to change is long, find the compromise, imagine the third way, keep my eyes forward on the—blah, blah, blah.”

“I can see you’re paying attention.” William smiled. “I won’t say anything, won’t tell you what to do. I’m just proud of you. That’s all I’m going to say.”

He was leaned back in his chair, sexy, relaxed. Looking at me intently. I decided to quit feeling sorry for myself for having to run the whole entire world and instead turn this night around.

I slowly climbed across my desk, aiming for William’s lips, pretending to want a kiss, but at the end reaching down for the last bag and lifting it. “Mine?”

He shook his head slowly. “You are incorrigible. And that Stelley, is a present.”

“For me?” I batted my eyes, laying on my belly across my desk, holding the present in front of me. He nodded.

I backed off the desktop pulling the bag to my lap. I reached inside and pulled out a box wrapped in red paper and tied with a string. “Why?”

William stood, walked around my desk, and leaned on it. “Because today is December 25th.”

“Historically this date is called Christmas.”

I looked at the package dumbly. He added, “A holiday that used to be celebrated by giving people you love presents.”

I said, “All I needed to know was—presents, not on my birthday. Can I open it now?”

He grinned, “Of course.”

I ripped the paper open to reveal a cardboard box. Suddenly it felt precious, so I placed it gently on the desk and opened the lid. Inside was tissue paper and when I peeled that away, a shiny glass ball. I stood, reached down, and pulled it gingerly from the box. It was about six inches in diameter, heavy, smooth, shiny glass, the outer wall was clear and thick, and inside was a free floating smaller sphere, painted like a suspended, glistening, glittering world. When I turned the sphere to the right, the world floating inside spun to the left. “It’s beautiful.”

“And if we turn off the lights.” He pushed the overhead light’s button, throwing us into a hazy grey darkness.

The interior sphere sparkled with tiny dots of light. And the outer glass was full of tiny pinpricks of glittering lights like stars. I spun it back and forth watching the lights glimmer and sparkle. It was so beautiful that I felt kind of untethered, tears welled up.

William said, “This Stelley, is the whole entire world, you just have to hold it and keep it safe, I can’t think of anyone better suited for the job.”

“You’re welcome. Also, note the stand, you get to put it down whenever you want. You can leave it here, at the office, go home, and it will still be here when you return in the morning.” William placed a circular stand on my desk, and I placed the sphere down on it. I marveled at the way it glowed and sparkled for a moment, and then I stood up. William wrapped his arms around me and kissed me on my forehead, in that best place, right at the edge of my hair.

I nuzzled in, hugged, and then I looked up, placed my hands on his cheeks, kissed him, and said, “Let’s go home.”

William and Estelle are the two main characters of the YA trilogy, Bright, Beyond, and Belief. This tiny story is a glimpse at their lives after the trilogy ends.

Published exclusively on Amazon: The Estelle Series. Bright is also available as an audiobook! 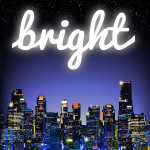